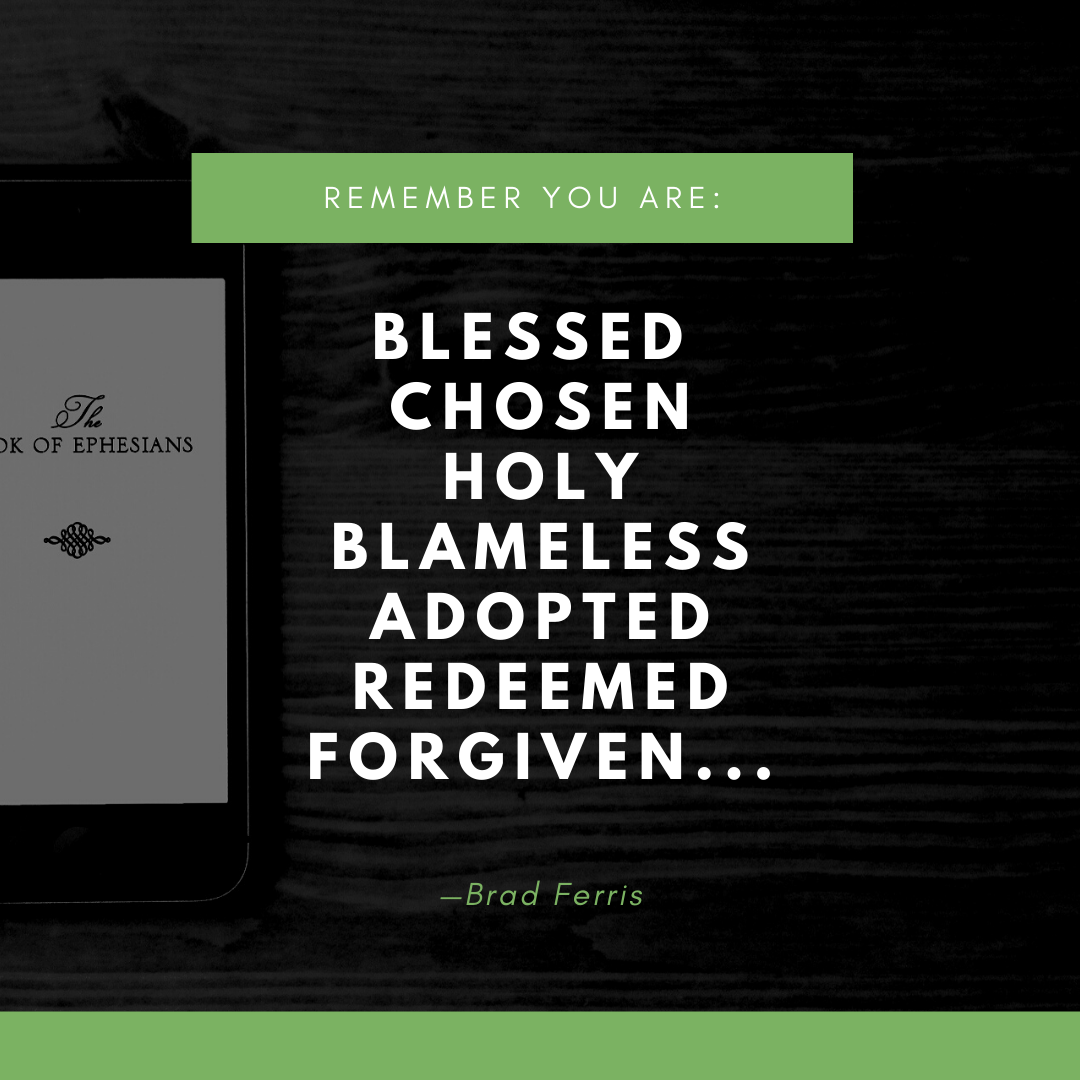 I just love Ephesians 1!  I recently started going back through Ephesians in my daily study and prayer time, and the truth of Ephesians 1 is so powerful.  Ephesians is an encouraging letter Paul wrote to the believers in the church in Ephesus.  It was written around 60 A.D. during a time when it was believed that Paul was in a prison cell in Rome.  He wrote this letter to encourage the Gentile believers, and to make it clear that Jews and Gentiles were now, together, making up the Body of Christ.

“The Chosen” is a powerful series that you can watch on YouTube or through Facebook that chronicles Jesus calling the disciples, their decision to follow him, and the ministry that would follow.  There are currently eight episodes with more on the way sometime in the future.  I highly recommend you check out the series.  It may be the best depiction I have seen yet of the humanity of Jesus while holding true to the deity of Jesus.  There’s a powerful scene in episode seven when Matthew is found in his tax collector booth.  Jesus suddenly passes by the booth, then stops and goes back and calls Matthew to follow him.  In the scene Peter, naturally, objects to Jesus calling a hated tax collector to be a disciple.  Peter says, “I don’t get it,” to which Jesus replies, “You didn’t get it when I chose you, either.”  Peter has a quick response, “But this is different, I’m not a tax collector!”  Jesus looks into the eyes of Peter and simply says, “Get used to different.”

It’s been different ever since Jesus came and lived and died and lived again.  When I read the words of Ephesians 1 last week I couldn’t help but think of that powerful line in “The Chosen” from Jesus:  “Get used to different.”  Here’s Paul’s opener to Ephesians:

Praise be to the God and Father of our Lord Jesus Christ, who has blessed us in the heavenly realms with every spiritual blessing in Christ. For he chose us in him before the creation of the world to be holy and blameless in his sight. In love he predestined us to be adopted as his sons through Jesus Christ, in accordance with his pleasure and will—to the praise of his glorious grace, which he has freely given us in the One he loves. In him we have redemption through his blood, the forgiveness of sins, in accordance with the riches of God’s grace that he lavished on us with all wisdom and understanding. And he made known to us the mystery of his will according to his good pleasure, which he purposed in Christ, to be put into effect when the times will have reached their fulfillment—to bring all things in heaven and on earth together under one head, even Christ. In him we were also chosen, having been predestined according to the plan of him who works out everything in conformity with the purpose of his will, in order that we, who were the first to hope in Christ, might be for the praise of his glory. And you also were included in Christ when you heard the word of truth, the gospel of your salvation. Having believed, you were marked in him with a seal, the promised Holy Spirit, who is a deposit guaranteeing our inheritance until the redemption of those who are God’s possession—to the praise of his glory.  (Ephesians 1:3—14, NIV)

Allow me to point out some important words.  Words that tell us we’re different.  You are:

–blessed with every spiritual blessing in Christ.

–for the praise of his glory.

–sealed with His Holy Spirit.

This is who you are because of Jesus.  Get used to different!

Which description of who you are in Christ means the most to you?

Living to be different,